My name is Johnny Galaxy.
I live in Norfolk. The UK version.
Married, two kids, two dogs and a cat. All top bleedin’ notch.

I started off in a local band called ‘The Lemon Men’
Our highlight was performing in front of 300+ at the West Lynn Community Centre.
Our style could be best described as ‘Punk Shadows’ ahead of our time. (still far far ahead)

I use the Reaper DAW. My current fave VSTs; Xfer Records Serum and Massive X.

Signed to Pink Dolphin Music Ltd, my debut album “Are you still watching?” was released in 2018.

Influences include the one and only Gary Numan. French 79,
Leftfield, The Orb, Orbital, Paul Hartnoll, Aphex Twin, The Field, Fukkk Offf,
Fujiya & Miyagi, Vitalic and Ulrich Schnauss to name but a few. 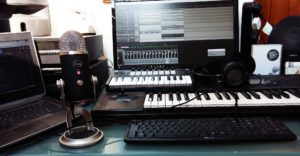 
Special thanks to
Chris Watts and his #InTheMoog radio show for the ongoing support: @chriswatts1965